Paid promotion for Disney. All opinions are mine alone. #CelebrateMARVEL

Come take a peek at my picks for MARVEL 80th Anniversary Collectibles on Amazon.com, as well as 5 tips for displaying your MARVEL collections.

As a huge MARVEL fan who loves to collect, I quickly had my eye on lots of MARVEL 80th Anniversary collectibles. Since we do quite a bit of shopping on Amazon.com, it’s become a source for everything MARVEL for me.

TIP: To purchase any of the MARVEL 80th Anniversary items shown below, just hover over the image! 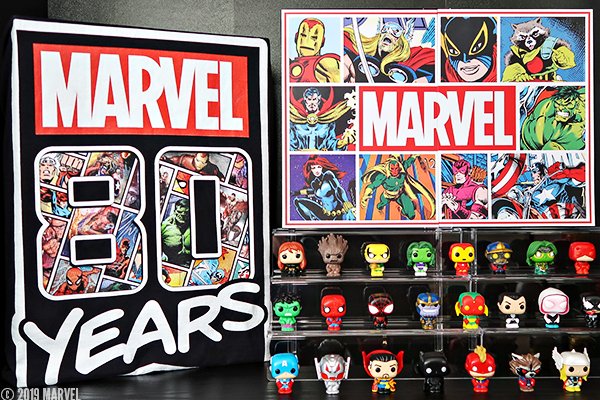 My MARVEL collecting is fairly diverse. For the most part, I collect items based on what catches my eye or features my favorite characters. The #1 MARVEL item I collect is Funko POP! figures. At my last count, I’m approaching 100 MARVEL Funko POP! figures and I have no plans of stopping anytime soon.

The #2 item I collect the most is MARVEL apparel — mostly shirts. I’m a total t-shirt and jeans kind of guy, so if you ever spot me at a con, movie theater, or grocery shopping around town, you’ll no doubt see me wearing one of my favorite shirts.

One of the things I enjoy the most about wearing my MARVEL shirts out and about is connecting with other fans. Almost every t-shirt I’ve owned has had people come up to me and tell me that they love it and usually we chat and connect on our favorites. Wearing pop culture t-shirts is a great way to meet fellow MARVEL fans!

When I saw the MARVEL 80 Years of Comics t-shirt on Amazon.com, I HAD to have it. Not only does it celebrate this huge milestone, but check out that design! I love it.

In addition to picking up the MARVEL 80 Years of Comics T-Shirt t, there were a few more MARVEL collectibles that I had to add to my collection from Amazon.com. I picked up the Funko Advent Calendar: MARVEL 80th Anniversary, and Funko Pop! MARVEL 80th: First Appearance – Human Torch.

While the Human Torch Funko POP! figures was a must on my list, I was even more excited about the Funko Advent Calendar.

This advent calendar is a fun way to countdown the holidays. It includes 24 Pocket Pops, with each one contained in a display box with 24 doors.

Most people will probably buy this and start opening a door-a-day beginning on December 1. There is nothing wrong with that at all, but there was no chance that was going to happen with me!

TIP: If you plan to use the Funko Advent Calendar as a countdown to the holidays, you can easily reuse the display box for multiple years, even placing the Pocket Pops in different doors to keep the element of surprise.

I’m a big fan of the Funko Pocket Pops, but prefer them not to be in keychain form, so being able to get 24 Funko Pocket Pops without the keychains – and it being MARVEL characters – is a big deal and really cool.

When it comes to displaying MARVEL collectibles, there are many ways you can do this. Here are my 5 tips for displaying your MARVEL 80th Anniversary collectibles:

I hope you’ve enjoyed this peek at my newest MARVEL 80th Anniversary collectibles from Amazon.com! I encourage you to visit www.amazon.com/marvel and shop the collection now!